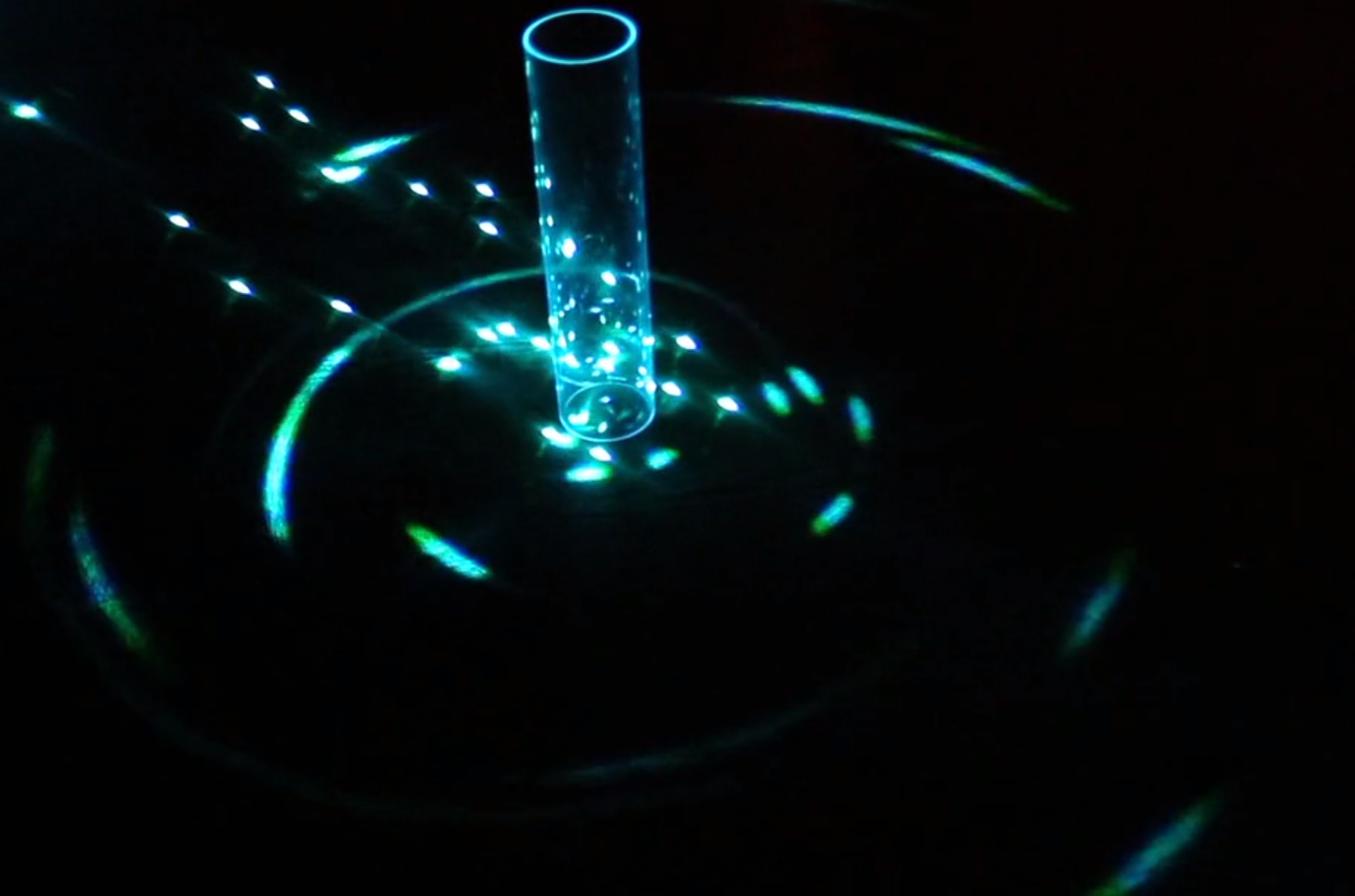 In Nov.1-5th, 2017 “Smart Illumination Yokohama 2017″( http://smart-illumination.jp/ ) was held at the elephant’s nose park, Yokohama We exhibited “light wave (hikarinami)”.
I made my own work for the first time and exhibited.
So I got so many things, my feelings increased and I became a long sentence poem, but I think whether the feeling will be transmitted sufficiently if you read it.

Please look at pictures of my work: 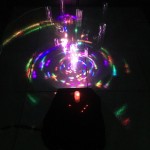 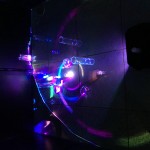 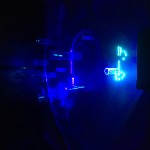 Although the image of a sharp light is strong when it is called a laser, depending on the usage of light it can give a soft impression. In this work, the laser hits the object, you can see that the light reflected on the floor looks like a wave. I am glad that it makes me feel that things change not from one aspect to another, but how they look.
http://smart-illumination.jp/program/samazama_na_hikari/

I think that there are a lot of intense light like the live and the club seeing the laser beam that you see frequently.

It is exciting and powerful. (And a bit dangerous)

This work uses a different usage.
By reflecting the laser, light appears like a wave, and it involves a complex pattern.
The same and slightly different light fluctuation.
It is good to be healed by gazing at the light which is repeatedly repeating, returning it like a wave.
It is okay to shake the shining rod and to repair that light like a wizard.

Enjoy interactive nature, lightly watching the light wavy, or laser itself is a light source that is hard to shoot so try challenging for shooting.
It is a work that various ways of enjoying content differ depending on experiences.

While supporting the explanation and experiences at most booths during the holding period, I occasionally leave the booth,
Observe how everyone will experience → update by the next day’s holding
I was repeating that.

It was not an interaction(gesture) that shake sticks on the first day (another operation method), and there was no explanation of how to use.

But the Thai people who were exhibiting at the next booth were very kind and one person praised me.
Also, when guests actually open the visitors come visit me, give them a loud voice, enjoy people who keep looking for a while for a while, or who are watching how the mechanism is going.
Some people enjoyed it in their own way, others said that they liked it very much. As time went on, anxiety turned to self-confidence.

After a few days, it became a feeling that my work grew.
At first I did explain the work and the way to experience,
if guests do not do anything when they let everyone see the beautiful light without explaining the function to switch light especially to see the light, the repeater will come and shake the stick.
Then the people who did not know such a thing could “could do such a thing”, or “Oh Oh” and the cheering sounds as if they are very pleased, and as a conductor of the repeater this conductor It was a leading role of the.
At first it was a feature that was easy to put on, but it was very interesting without thinking myself that it would have such a big impact on the work.
Moreover, it seems that he liked the work itself very much, and the person who was shaking the stick explained to the other people how to use the stick. Then the person shook it, as the light changed, I felt a feeling that I was manipulating the light and got a different impression from when I was only watching, from the viewing works to the works to experience It seems that I was pleased with what changed.
And another person who saw it taught by the person who operated it and manipulated and manipulated by another person ,,, There was a repetition phenomenon that a person who was watching the figure from a distance came close to … There was something awake.

Is my work okay before the event? I was worried that I was enjoyed this much, I am sorry that the author is uneasy! I was sorry in my mind.
And, I also increased the desire to cherish and grow this work day by day.

I got a lot of grateful experiences to say so, the last day.
I applied for the Smart Illumination Award this time, but I have an awards ceremony for that award.

Judges around the applicant’s work around the open time of the day and will review it.
Though I was thinking of words to speak with judges as an early time, I was thinking about words, but thanking you very much, there are a lot of people who have already enjoyed themselves in the time of appraisal, so the explanation to the judges can not be done properly (explanation I was explaining to the person who is in trouble or asking questions from the visitors as well) even when I was doing) I wonder if I can be awarded, I was glad when I was able to do, but as a result it was indoor exhibition I received the Excellence Award.
(Actually, there was a conflict secretly that it would be fundamentally important to support and explain to those who were experiencing difficulties in explaining it well, but actually experiencing it on the spot.)

It is naturally nice, but it is after the awards ceremony.

Because the exhibition time was still left, when the commemorative photography ended and it was about to return to the place of holding.

Although I had her to talk to me, I was pleased with the feeling that the words I got to say are chesting.
“What I was exhibiting was pretty good, so I came to worry about winning! I was glad I was able to win, I am glad that we could talk about this because I was cheering.”
That is what she said.
That person said that although I was alone when I was alone, it was said that it was good that the children who were nearby showed beautiful lights in various ways.
I am delighted that I am so happy that what I have thought about here where I did not notice …
To be honest I’m just writing this sentence like this, even though I just wrote a sentence, I’m getting along well.

I wrote the comment again, there were many things I was happy about.

I was worried very much but what I made is very much accepted by visitors,
Thank you for giving us lots of thankful words,
Children and adults also wanted to try to manipulate the light themselves and enjoyed being able to line up,
A person who raises cheers whenever changing light,
Those who enjoy lighting excitingly by changing lights themselves,
People who look at beautiful and see for the first time,
People who always say “I can keep watching forever” after seeing it for quite a while (a few minutes to 10 minutes, etc.)
People who take pictures intentionally,
I was praised such as idea power that I did not have confidence, mounting power, etc.,
It spreads to spread other people to enjoy this work that he enjoyed, and by accidentally explaining to people around us that the people who were there were born through the work,
People who told me they wanted me at home,
It is so wonderful that I told you that I will definitely go see if there is a place to see the work next time.

There are still more improvements and things I’d like to try but I am very happy that I was able to move my heart so far by myself alone and I gained my confidence.

I got a lot of very glad words of cheering, so I thought about keeping this work more carefully and keep updating it to become a more wonderful work.

First of all, we have to proceed where we can exhibit next.
Please continue your encouragement.

Yokohama, the venue, was a place I lived at the time of my university, a city that I started living in and started living by my own family.
I was not familiar with college so much, I was working part-time at Motomachi in Ishikawa Town from Minato Mirai, where I got to have a good day with friends and get together. Perhaps if I were only a school, I think that my life was quite different depending on whether I drop out and go home.
In such a place I liked very much, including the atmosphere of the town and people, I was able to have such an opportunity in a memorable place and have had a wonderful time.

I know, although I did not get the best award, I think it is too strong feeling to write so far, but I wrote poem unintentionally because I got so many things for the first time.

Well, from now on I would like to develop this work and more opportunities to create such opportunities so I have to find places for presentation so I began collecting information in various ways, but I am in a fumbling state … 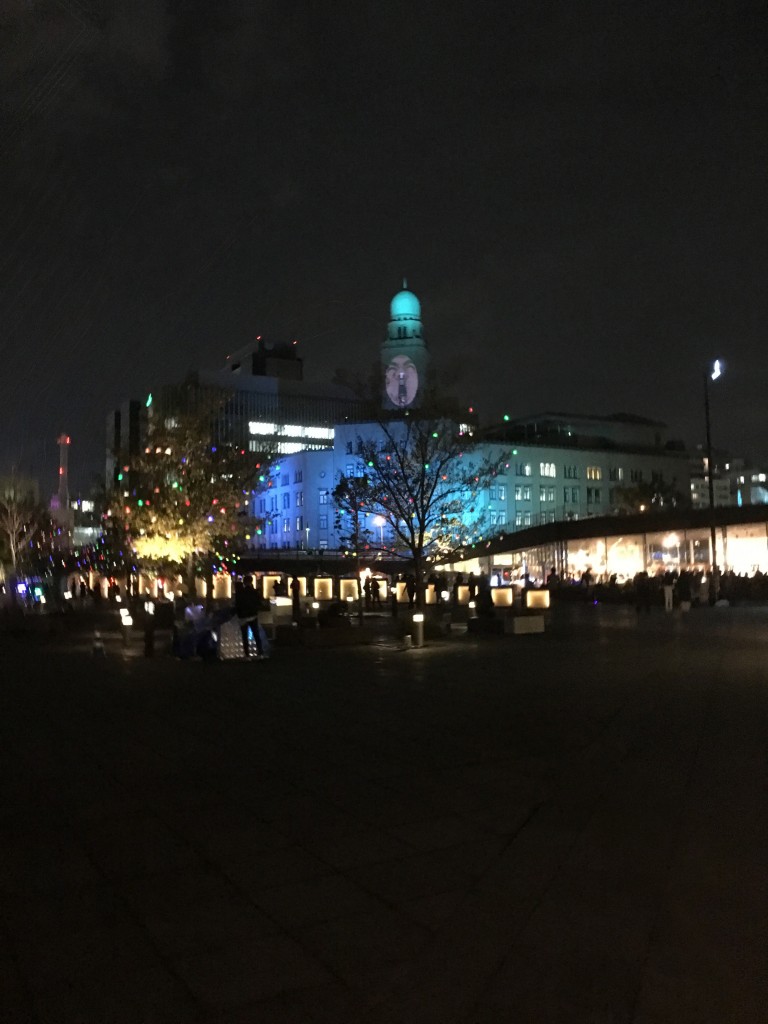 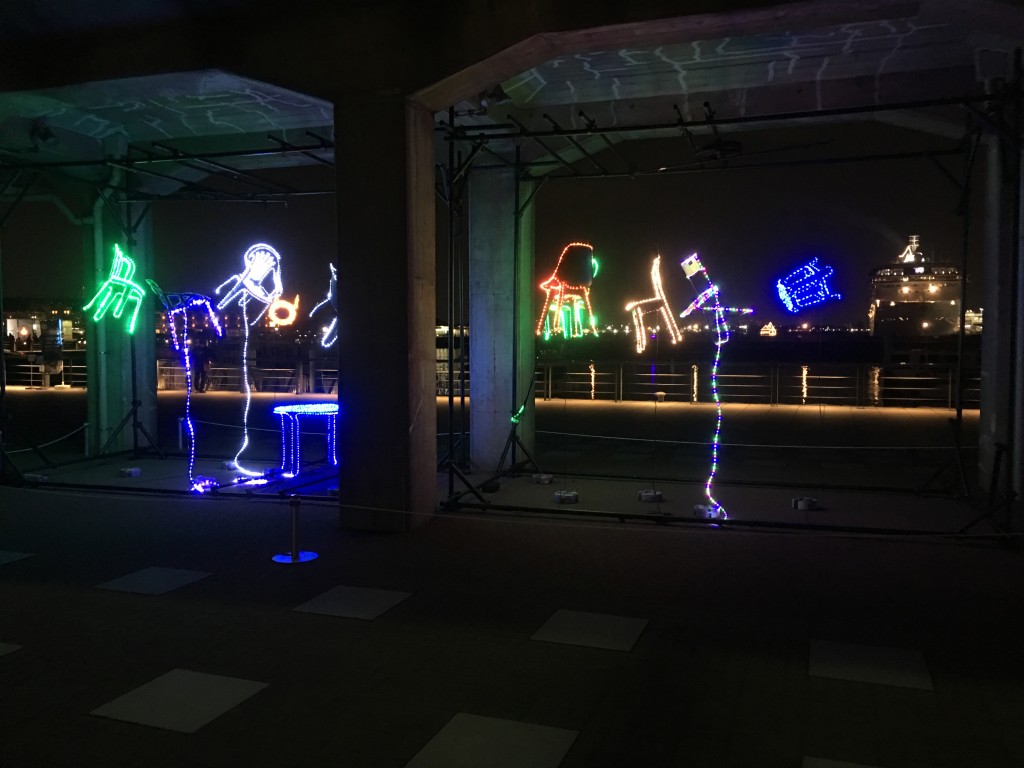 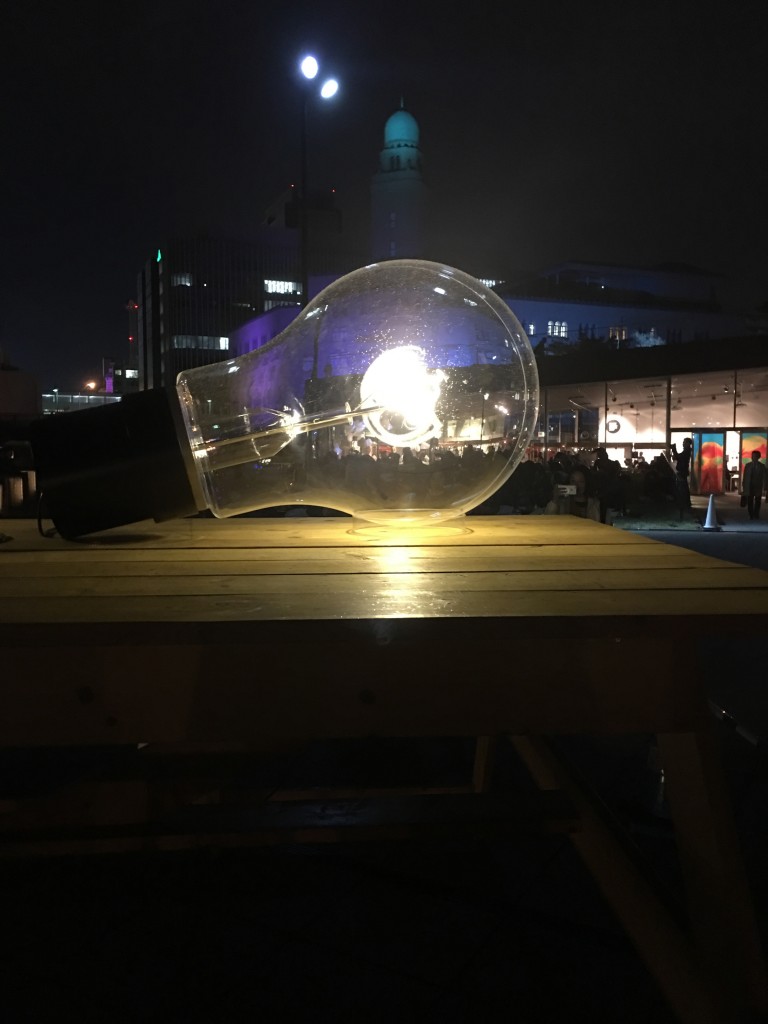 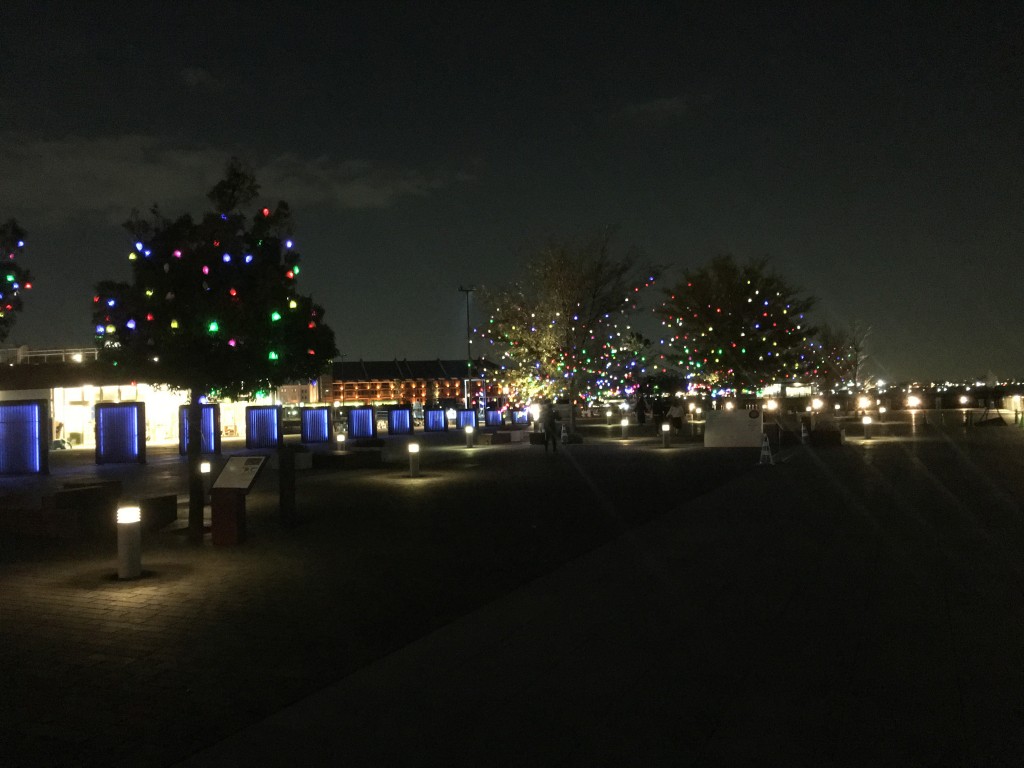